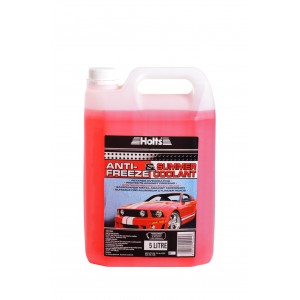 Availability:
In Stock
Add to Cart
Add to Wish List
Add to Compare

USED TO PROTECT AGAINST FREEZING & OVERHEATING

SABS 1251 formula has a maximum of 5% water and is ready to use, which means that it should not be diluted further i.e. only 6(depends on radiator capacity) x 1lt antifreeze should be added to the radiator, no additional water.

SABS 1839 formula has a maximum of 40% MEG and is ready to use.  Which means that it should not be diluted further i.e. (depends on radiator capacity) 6 x 1lt antifreeze should be added to the radiator, no additional water.

The Holts formula is 40% MEG and 60% water with a dilution rate of 50% antifreeze to 50% water.  On a 6lt radiator, this means that 3 x 1lt antifreeze should be added to the system and 3lt of water.  This will effectively only give you 20% MEG in the cooling system with a protection rate of up to –12C.

To ensure that 40% MEG is in the system, the Holts product should be used as is i.e. 6 x 1lt antifreeze with no additional water being added. This will give protection up to –24C

SABS REQUIRES PROTECTION OF UP TO –30C

The only antifreeze formula that is safe to be used on aluminium heads and is guaranteed not to cause any pitting of the aluminium is:

Only the Caltex Extended Life and Castrol SF products are made accordingly.  These products do not contain any Silicate or Borax, but has some other replacement chemicals added.

The Caterpillar and Delta/Isuzu antifreeze formula also contains no Silicate or Borax.

Various motor manufacturers insist on their own branded antifreeze.

If the antifreeze to water ratio is too weak, then various problems will occur over an extended period of time i.e.

-          general deterioration of parts in the cooling system

USED TO PROTECT AGAINST OVER HEATING

Adding Antifreeze/Summer Coolant to the cooling system will only assist with protection against over heating.  A cooling system filled with 100% MEG will start boiling at 140 degrees.  A number of other factors play a more important part in preventing over heating.

The radiator cap will start releasing pressure (when the vehicle is stationary) at approximately 105 to 107 degrees.  In general, the water that enters the water pump should not be hotter than 100 degrees.

Antifreeze/Summer Coolant in the cooling system plays a very small part in the prevention of overheating.  The conditioners, anti foaming agents and rust inhibitors, together with the anti freezing properties in the product, is the main reason that anti freeze should be added to the cooling system.


Your Review: Note: HTML is not translated!

Enter the code in the box below: